Rides to reopen at Conneaut Lake Park/Rise from ashes

Enthusiast coaster & amusement park chatter about whatever. If it's not about coasters & parks, it'll go to the garbage file. Keep it on-topic and flame-retardant, please.

Rides to reopen at Conneaut Lake Park/Rise from ashes

We are working with Ride Vendors to assist in getting the rides operational. The Blue Streak may not come online until the following year due to the additional work and repair expenses.

Operating hours for 2009 will be announced once the status and dates of the Park's opening have been determined.

Conneaut Lake is back!

This has made my day. Now I am definitely looking forward to the 2010 Con.
www.justcoastingalong.blogspot.com
Top

That is some awesome news...then when the Blue Streak gets operational I will head East to give it a ride.

Phenominal news!! It's a shame that Blue Streak may not be ready for this year, but I'll be hoping that it's ready soon!
Facebook www.facebook.com/daretofly121
Twitter @daretofly1927
YouTube https://www.youtube.com/channel/UCu9GO5 ... PIEy52PgNg
Top

Kiddieland rides will require less work than the bigger rides.

The Devil's Den all you will have to do is take off the floor from the haunt. I made sure not to damage the ride tracks when I put that in.

Bumper Cars only really need work on the cars and taking the wall from the fog down.

Tumble bug should be in good shape

Carousel all you have to do is retrieve the organ and a few horses that are in storage.

Need new breaks on the Witches Stew, and new motors for the rides that lost theres in the fire.

A little late to say CLP is now back, but I so feel like they have done a LOT of fantastic work so far that we can be good to ride on. : )
Top

kidcoaster wrote:I know that the train still runs but will require some track work

That's to be expected from sitting idle. How much hope is there that the track work will be done by the end of the season?
Facebook www.facebook.com/daretofly121
Twitter @daretofly1927
YouTube https://www.youtube.com/channel/UCu9GO5 ... PIEy52PgNg
Top

Should not need much since the whole track was replaced in 2006. Greg said some leveling needs done to but the ride its self runs well. Heres proof taken on Halloween last year.

While this is awesome news, I read at the local newspaper forum for CLP that the train track had some issues with ties not being properly spaced and things like that. And that it probably would not pass inspection, don't know how true that is. Read this a while back.
I look around and see my wonderful life
Almost perfect from the outside
Top

So how was the park able to pull this off? I thought they had to pay back a ton of cash to debtors before re-opening?

They still owe alot of money. But I think outside Tenants are going to run them. I can not confirm though just my own thought.

Oh hopefully that your thought would be truly the correct one as the park is now trying to bring a LOT of memories back again, like they no longer wanna have us worry about the park's going. It would be more wonderful if the Blue Streak came back. : )
Top

They will also reopen Eizabiths Dining room which has been closed since 2006. And the Sprit Lounge will reopen after being closed for almost 5 years.


CONNEAUT LAKE -- The first relatively quiet offseason in several years could give way to the busiest stretch of warm-weather months in recent memory for Crawford County's once-premiere summer resort.


Conneaut Lake Park is moving ahead with plans to open the Hotel Conneaut and the Beach Club restaurant-bar for their first full seasons since 2006. Several special events have been scheduled at the 117-year-old amusement park, including bands and cruise-ins over the Memorial Day and Labor Day weekends and the return of the Fall Pumpkin Fest and "Ghost Lake: The Haunted Amusement Park" in October.

The park's 12-member board of trustees continues to solicit offers from individuals or companies interested in leasing and operating portions of the park, including its amusement rides.

"It's a little bit light, but we are seeing some interest generated there," board President Jack Moyers said. "It kind of came at a bad economic time."

The economy notwithstanding, the level of activity at the park is more positive than it was over the past two winters.

The 2006 offseason featured a failed attempt to sell a piece of park property to raise money to pay off its more than $2 million-plus debt and cover the costs of reopening that season. Subsequent attempts to raise operating capital also failed, forcing the park to shut down for the year.

In 2007, the newly appointed board's efforts to reopen the park were derailed in large part by an arsonist who set fire to the historic Dreamland Ballroom in early February, destroying the massive building and part of the adjoining midway.

So far this year, the only notable challenge facing the board is trying to figure out the motives behind a Mercer County corporation's purchase of debt the park owes Summit Township for unpaid amusement taxes. Some speculated First Capital Finance Inc.'s purchase of the roughly $152,000 debt for $200,000 in January would lead the company to try to force foreclosure of the park, which sits in public trust, to recoup its money.

No action has been taken so far.

Moyers said that despite the uncertainty from the debt purchase, the park board believes it has generated some momentum in its efforts to return Conneaut Lake Park to a viable operation.

"I think we've developed a greater understanding of the function of the park and what needs to happen in order to preserve it," he said.

Helping to advance the board's plan was the completion earlier this year of lease agreements for the Hotel Conneaut and the Beach Club. A group of local investors will operate the hotel under a 30-year lease and will run the Beach Club under a 20-year lease. It plans to invest hundreds of thousands of dollars to upgrade both facilities, said Greg Sutterlin, of the investment group.

The Hotel Conneaut, which opened for a portion of 2008, will have up to 120 of its rooms ready for occupancy this spring, Sutterlin said. Work is also under way to open the Spirit Lounge on the hotel's ground floor for parties, seminars and other special events, and to transform a room off the lounge into a playroom that can be rented out for birthday parties and other activities for children, he said.

The development group also plans to add a pool to the hotel property and will renovate the hotel's Crystal Ballroom and its lower-level restaurant, which they hope to lease out to a separate operator, Sutterlin said.

Roof repairs and other improvements are planned for the Beach Club and the adjoining Dockside building, which the group hopes to rent out for dances and other special events, Sutterlin said.

The park board has set up a Web site to provide information on other areas of the park that are available for leasing, and it is talking with people about the possibility of serving as the park's events coordinator this summer, Moyers said.

"I think in a matter of few weeks we'll be able to confirm more activities in the park," he said.


@ On the web: Information on Conneaut Lake Park can be found at http://www.conneautlakepark.com. 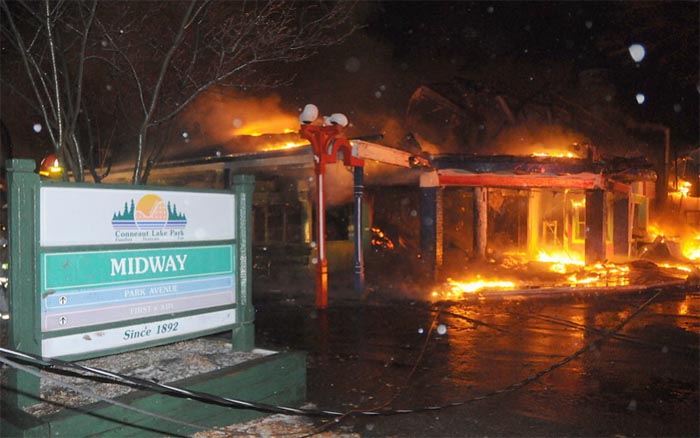 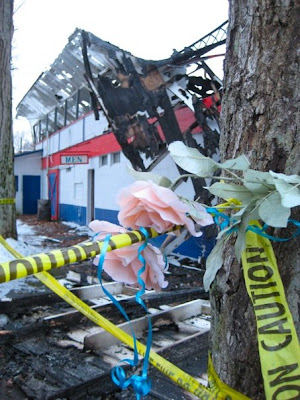 All this reminds me of when they raised liberty the second from the bottom of Conneaut Lake after it sunk in 1922 and was raised in 1985. It sunk during a test run when the engine sparked a fire. CLP is a true Phenoix

Users browsing this forum: No registered users and 5 guests