A group of friends who have fun, ride, post & chat about coasters, amusement parks and everything else.
http://www.negative-g.com/forum/

by Spencerman
Oh golly. I sure hope NL2 will run on my computers. The first one runs well with high FPS, but I am not so sure about this game.

by Spencerman
Wow, really? I never thought they would discontinue it! I am so glad to have the original. I love it so much, and it has taken me a long way.

by CptBeeble
My new iMac arrived today. Haven't unboxed it yet. Went down to Kemah for a couple of Bullet rides (HOLY CRAP it was FLYING!!!) and dinner. Sometime this weekend I'll get it up and running and figure out how to install Windoze on it (something I said I'd never ever do). I think NL2 will be worth it, though.

by CptBeeble
While we're all waiting for NL2 to drop, have a listen to this podcast about No Limits history and behind-the-scenes on NL2. Fascinating.
http://player.fm/series/the-season-pass ... liff-91313

Spencerman wrote:Wow, really? I never thought they would discontinue it! I am so glad to have the original. I love it so much, and it has taken me a long way.

I was being silly, but they did say in an update from some months (maybe a year) ago that they were considering discontinuing it, but they weren't sure since the Mac release was going to be later than the Windows one.

by CptBeeble
I have a feeling that they might go the route of leaving it out there for sale in case someone still wants it, but no longer providing updates and support for it.
One nice thing (are you listening, Sony and Microsoft?) is that 100% of your old tracks and stuff is supposed to be able to work in the new version, so you can migrate to NL2 without having to trash all the work you did in NL1.

by Spencerman
Yeah, I remember hearing about the transfer thing. Also, PLEASE let me chill at your place until the end of the off-season!

by Paul Drabek
That was a great podcast. I ended up emailing him because one of the he features I have wanted for years is a Schwarzkopf Jet Star/Speedracer Train.

It would be sweet to be able to build some wicked portables in the vein of a Jet Star and some larger permanent rides like The Whizzer or Big Bend.

Maybe someday we will get this in No limits 2.x.

Oh it makes sense for them to keep selling No Limits 1 without any further support because there are customers out there whose computers can not handle NL2. So NL1 will be able to take care of those people.

by CptBeeble
I don't doubt they'll keep selling NL1, I just don't see them doing many more updates, if any.

I got Win8.1 installed on my new Mac via Parallels, so it's running through a virtual machine. If NL2 won't run well in that environment, I'll go to Boot Camp and install it natively.

Considering the hardware in this thing vs what they suggested on the website, I should be fine as long as I don't try to run 15 woodies all at once.

by Trackwalker
Did you notice in the NL2 picture of the wooden coaster above?

Real track ledgers.
Notice the bolts and nuts on the side of the track. They hold the side friction steel to the upper two layers of track wood.
Also, something you probably didn't notice is if you examine the side friction steel, you can see where the two strips of steel come together, just like the real wood coasters.
The walkboard doesn't wrap around the 4x6 bent posts like it did in NL1. Another more realistic item.
Real 2x6's on the side of the structure now just like a real wood coaster.
OH, and did you see the 3x4 diagonal supports within the structure holding the bents apart? Yep. They are there. No need to add them like in NL1.
Eight, that's 8, layers of wood in the track. I can't remember how many there were in NL1. Probably the same. But 8 is about average. The Beast at Kings Island has 9 layers of wood in its track. I think Mean Streak at Cedar Point has 11 or 12. The 70 foot high Screechin' Eagle at LeSourdsville Lake Amusement Park, Ohio, had 8 layers of wood in the track.
There is now a wire safety cable through the 4x6 bent posts just below the handrail. That's new also.
This is going to be a really realistic wooden model of a roller coaster.
I wonder if there is a tool so we can repaint the total length of the handrail without having to do each section separately by hand like in NL1? That would be nice. We will see. Can't wait to get my hands on the NL2 simulator.

by Trackwalker
Notice the NL2 wood coaster posted by Spencerman. This NL2 simulator is going to be the REAL THING!!! Oh, by the way, looks like they forgot to put supports under those ledgers that are overhanging the track below. Everything in this sim will be very realistic, unlike NL1.8 which has some flaws.

by CptBeeble
I noticed the safety cable in the handrails and the more realistic bent spacing and catwalks.
The level of detail in NL2 is just staggering.

I gotta say, Trackwalker, that I'm looking forward to your creations more than just about anybody else's. All the NL1 tracks are supposed to be able to make the switch, so your River Duelers and Bridge coasters are going to look that much better.

I'm wondering how much fun that Bridge coaster would be as an Arrow suspended.... the mind reels.

Speaking of suspended coasters, a racing/dueling suspended is going to be one of the first projects I tackle when NL2 comes out.

by Paul Drabek
I just want to play around with suspendeds and loops....that would be interesting to experiment with. I'm also curious if we'll see a few surprise trains/tracks in this like some Rocky Mountain wood/steel coasters?

by Sora
Arrow tried inversions for their suspended coasters, but instead of loops they made a corkscrew: 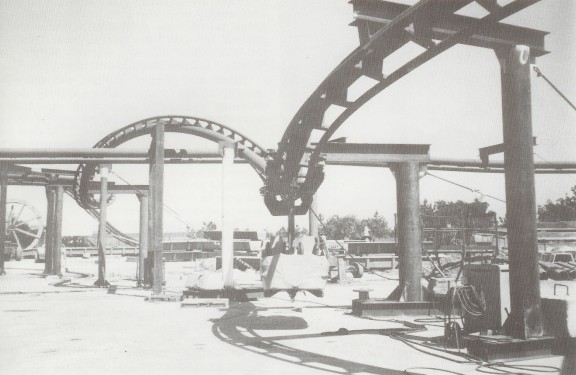 The flaw is obvious but it's a really neat idea. :)
All times are UTC-06:00
Page 3 of 5
Powered by phpBB® Forum Software © phpBB Limited
https://www.phpbb.com/