So the Gump family and I were down near Cave City, Kentucky the weekend of the Grand Awesomeing of Funtown Mountain. For those who don't know Funtown Mountain used to be Guntown Mountain where you could ride carnival type rides and go see a wild west show. The rides were probally removed some 15 years ago or so and the place stayed open as chair lift to see the old west town. Like many things in Cave City the park just couldn't survive as people want bigger and better and so it closed. This is where a very familiar face in Louisville and the Big Lewbowski fest came in by the name of Will Russell. Will runs a few stores called Why Louisville and with some money and street credit wanted to bring back the mountain top to some of it's glory . I really was expecting to see some cool things going on as the build up over social media was quite interesting and intriguing, but instead I was rather under whelmed and confused a little.

Upon coming to Cave City exit off 65 there were no big balloons or banners celebrating the rebirth of the mountain only some slight name changes I'll show later. When driving up to Funtown Mountain the old playful hand panted sign is replaced by a banner sign that appears new but slightly generic. 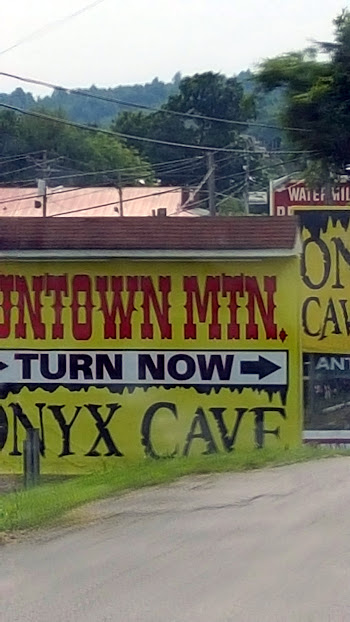 This pic, taken by accident really sums it up. Untown Mountain, as there was no Guntown part to Funtown Mountain mainly due to safety concerns over the old chair lift. I'll get to that later.

There were no signs to park but we managed to find some parking on the old lower lot .
Here's one of me and my boy in front of the old iconic sign for Guntown Mountain. You'll notice the slight change to the sign by applying an "F" over the "G". 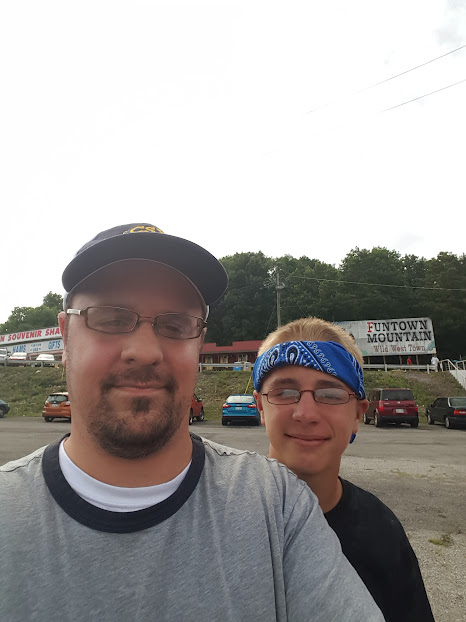 We came a weird time I think because there was almost nobody around and you could kinda tell the place was waiting till news came back to cover the opening. Upon walking up the steps to the newly christened Funtown Mountain we were greeted by a motley crew of sorts. There were what looked like some small very cheaply set up kids games standing around with no one manning them, and nobody really telling you what the place had to offer. It was very bizarre experience. As we walked to the Souvenir Shack, as it's called now we passed an animatronic band playing songs from O' Brother Where Art Thou. Then who should I see sitting down on the front porch but the new owner himself, Will Russell. I went over and asked for selfie as anyone who loves to meet the owners of amusement/ theme parks would and he graciously said yes. 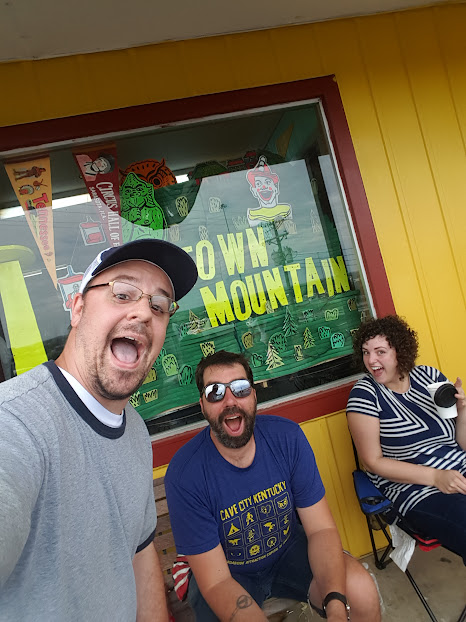 This was not intentional but I thought it was funny. Notice I met the man who bought his Own Mountain?

Will was a pretty cool dude who enjoyed riding around the property on scooter with huge American flag off the back, more on that later. There were funtime selfies which was basically old time photos and lots of old souvenir stuff for sell inside the building. We next headed outside to check out some the surroundings and most important the Haunted House and Blacklight Golf . 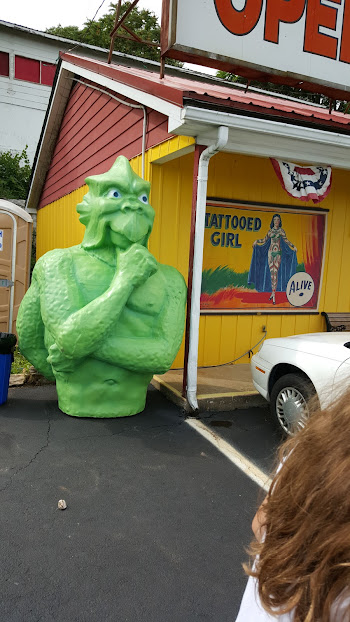 The Kraken is just some the random things you'll find at Funtown Mountain. 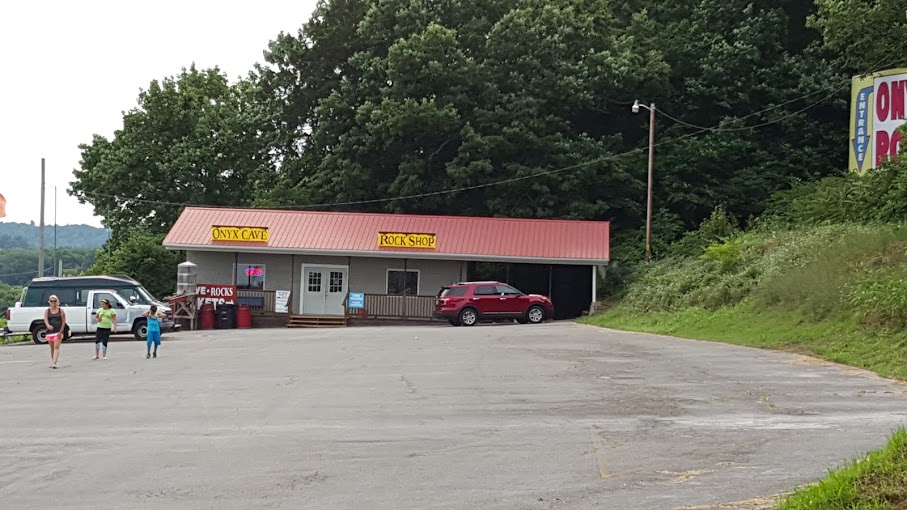 Here's the entrance to Oynx Cave and giftshop. 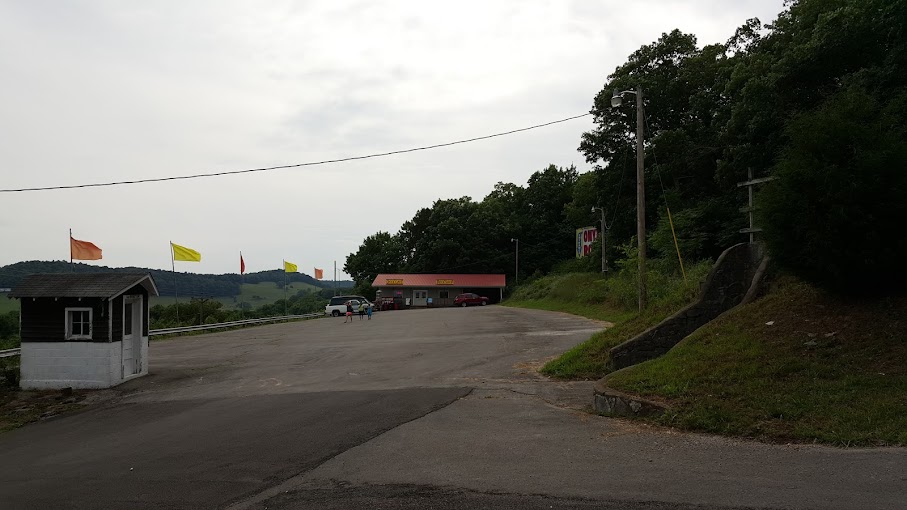 Here's another shot of the cave entrance. Not to many folks heading over that way.

This is the walk thru Hanted House that was only 5 bucks.

The Haunted House was being billed as one of the oldest walkthrough haunted houses in America. I can remember seeing this place as a kid and wanting to visit. It was definitely not what I expected. There are several moments of completed darkness and several buzz gags that activate as you step on a panel on the floor. There was second story that leads outside, so yes you do go the balcony. Once coming in from outside there's a shot of air from the floor to spook you, and then you come downstairs to the exit. The fun of the Haunted Hotel was walking through with a girl screaming in fear at top of her lungs, who was a little older than my youngest. If they got a lot of people in there I could see it being pretty crazy.

This is one of the first gags, kind of hard to see because of the reflection off the glass. 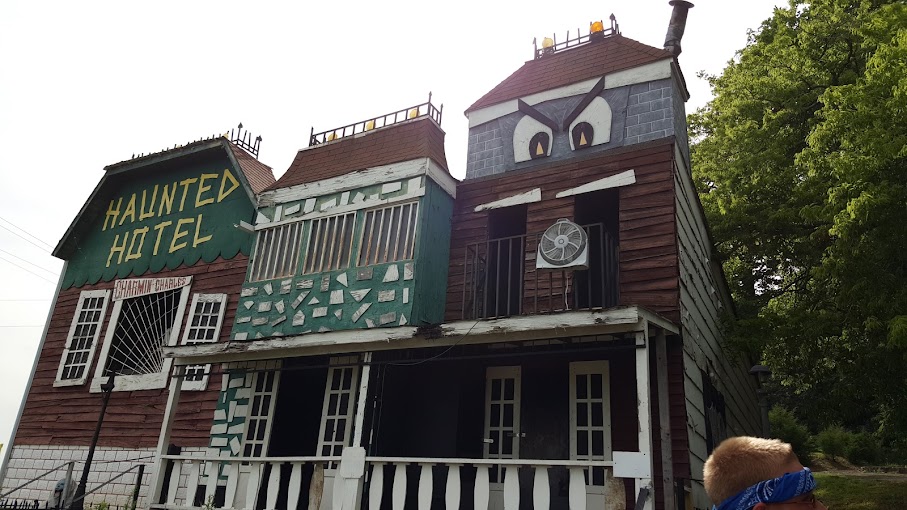 One last shot of the Haunted House.

To the right of the Haunted House just up some steps is the mountains new black light golf. There wasn't enough time to get the air-condition working for opening day so it was like 100 degrees in there. It wasn't quite like I was hoping it would be, but should be a good start to get things going. 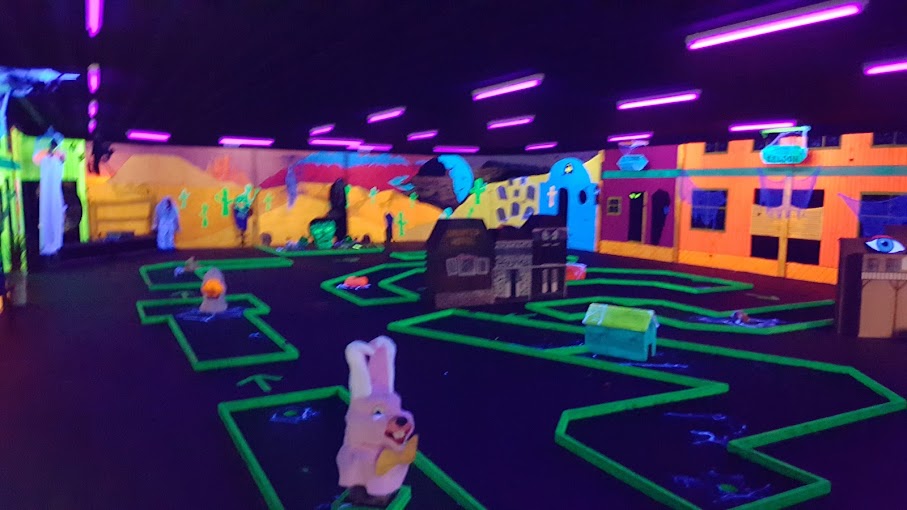 Not to bad for only 5 buck too! We didn't play because it was a heat box in there. 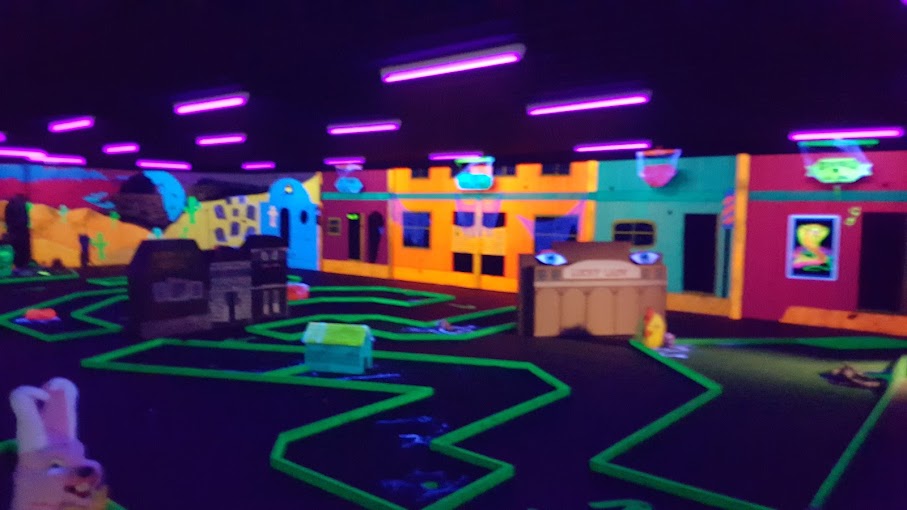 After we left the mini golf area we headed down towards the food and concert venue. 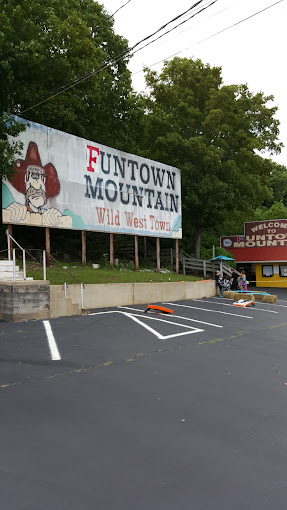 This is the old sign you can see from the road. Notice the care taken to use the most of what was already there. 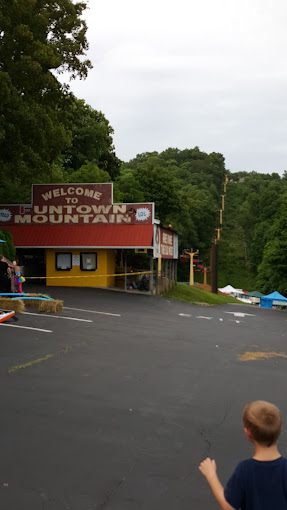 Chair lift building. Not operational at the time. Notice the big hole on the top part and the YOLO sticker! 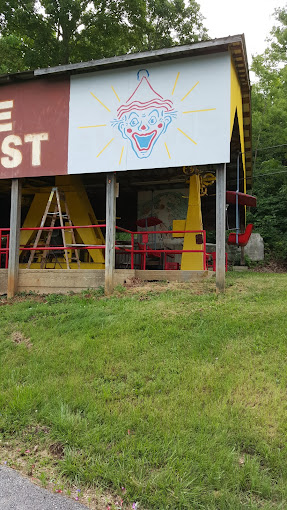 This is the new logo for Funtown Mountain, I believe borrowed from the old Fountain Ferry park that was in Louisville. 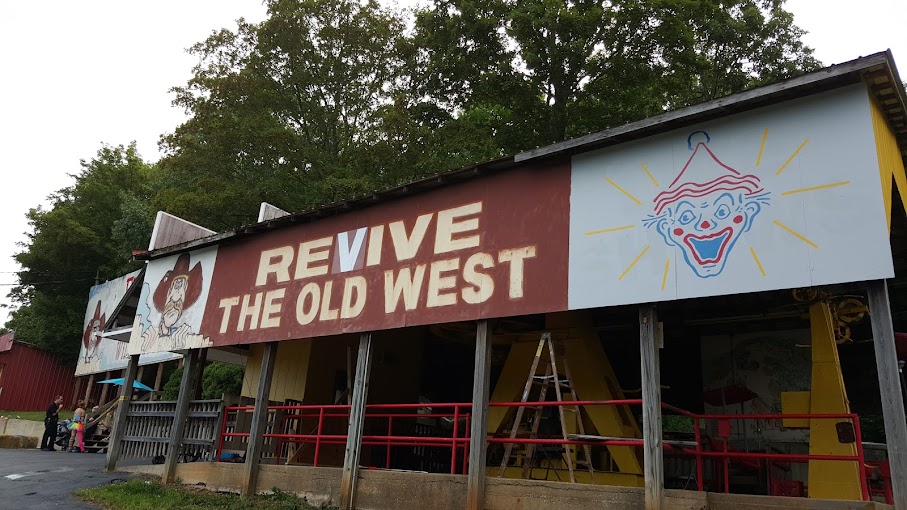 There's still a lot of cleaning up to do at Funtown Mountain.

Free bounce attractions for the kids. Didn't really see anyone working them besides the parents of other kids.

The whole lower section had food trucks, bails of hay thrown around for seating and a stage at the other end for nightly concerts. Think county fair experience with food trucks. 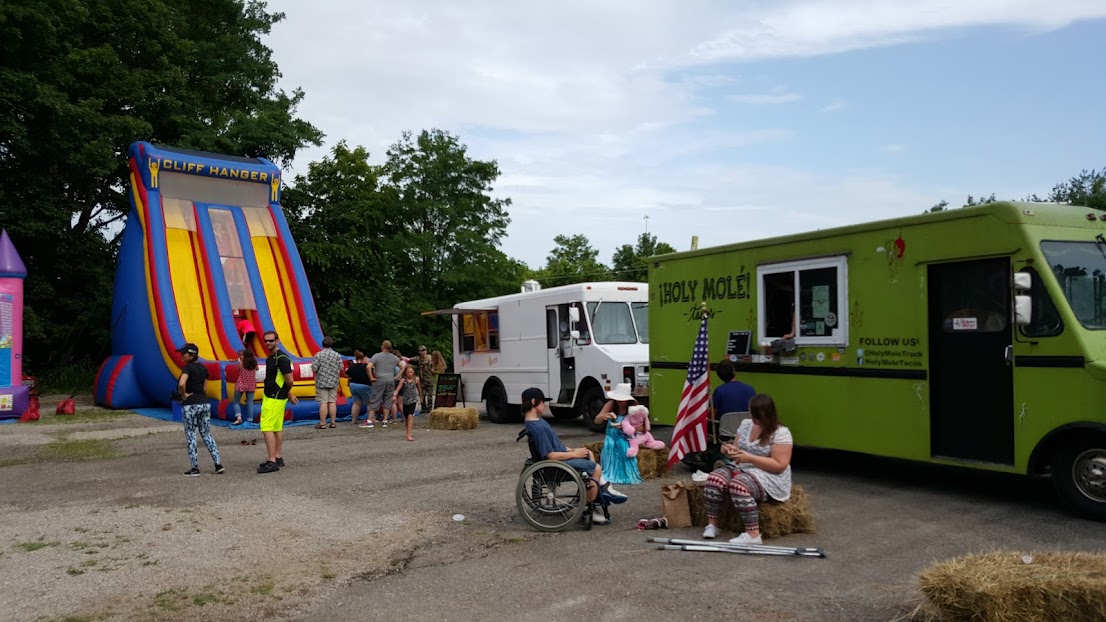 The owner of property was riding around in a scooter with the American flag hanging off of it. I thought that was funny.

The whole experience of the Funtown Mountain was weird overall. The buildings were stuck in the 60's and needed work.. The signage was ok but there wasn't directions to tell me how to do the things I wanted to do. The whole thing had an eclectic mix of people with a lot of nothing going on. The bright spots at the place really were the Haunted Hotel and Black Light Golf . If you're looking for a theme park or amusement park you won't find that at Funtown Mountain. I think everyone including me was hoping for that on opening day, but it's just ment to be that. It was a strange mix of a ride less carnival and roadside attraction with all the oddities that come with those sort of things. There's a lot of room for improvements and a lot of opportunity to be a truly awesome fun place to visit. Right now I'd have to say like many road side attractions the "fun" in Funtown is just marketing overhype. I do look forward to a returning visit to the Haunted Hotel and seeing what will happen with the place as I think it will succeed at being a top roadside attraction in Kentucky and bringing much needed life back to Cave City.
Last edited by Gump on Tue Jun 30, 2015 8:24 am, edited 1 time in total.
Top

Great Trip Report Todd. The place looks like it was kind of thrown together at the last minute. I have driven by and it would be cool to see a nice terrain coaster there...maybe a small Gravity Group but as weird roadsidey as the attraction and area is (IMHO the only legit thing in the area is Mammoth Cave) my gut says don't expect much.
Life is short....have fun!
Top

So in the latest news. Funtown Mountain has been reopened since closing due to the owner having legal issues. This place getting more and more amusing as time goes by. I hope they can get on track and the top of the mountain open and in some working condition and not loose the whole place to creditors.
Top

So they already closed and reopened after their grand reopening?
Life is short....have fun!
Top

Yep and the soap opera gets better each day.
Top

Gump wrote:Yep and the soap opera gets better each day.

Users browsing this forum: No registered users and 1 guest